One of Mitsubishi Materials' roots goes back to Sado City, Niigata Prefecture. Sado appears in Konjaku Monogatari Shu (The Tale of Times Now Past), written toward the end of the Heian Period and in Zeami's Kintosho (The Book of Golden Island) and has been known since ancient times as the "island of gold." The Sado mine, which belonged to the Imperial family was sold to Mitsubishi Goshi Kaisha in 1896 and thereafter supported the growth of Japan's industries with the largest-ever production of gold in Japan. This article introduces the history of Sado Gold Mine and the development of mining technology.

The Historical Site of Sado Gold Mine is roughly four hours from Tokyo by Shinkansen and jet foil (high-speed passenger boat). Found on Sado Island, located in the western part of Niigata Prefecture, the mine has some 400km of tunnels (same distance as that between Sado and Tokyo) and is known as the largest gold and silver mine in Japan. The vast site includes various mining facilities that are designated a National Important Cultural Property, Historical Site or Heritage of Industrial Modernization.
It is said that the history of Sado Gold Mine began in 1601 when three speculators who were mining for silver in the Tsurushi Silver Mine in Aikawa discovered a new vein of gold amongst the silver. In 1603, Shogun Tokugawa Ieyasu placed Sado under his direct control immediately after winning the Battle of Sekigahara.
The Shogun immediately appointed Okubo Nagayasu as its administrator because Okubo was originally from Kai and had knowledge of gold mining.
Under Okubo, the Sado mine was exploited, beginning with the largest Aoban vein, followed by the open-pit Dohyu vein, the Ohkiri vein and then the Torigoe vein. At its peak in the first half of the 1600s, the mine produced more than 400kg of gold and 40 tons of silver per year. The Sado mine suddenly became Japan's largest gold and silver mine and precipitated a gold rush.
Over a period of approximately 270 years thereafter until the end of the Edo Period, a total of 41000kg of gold were mined and supported the Tokugawa Shogunate financially.

Power lines installed inside the tunnel to increase production (1939)
Switching yard in the former Ohdate shaft hoisting house (made of wood)
The Kitazawa flotation mill (rear centre) during the Meiji Period
"Sado Mine Open House," held since the Taisho Period

The Sado mine became famous as a gold mine, but its production declined from around the middle of the Edo Period prompting the Meiji government to send a Western engineer to the mine in 1869 to deal with the situation. As a result, in 1877 an ore mill was built using Western technologies and the Ohdate shaft, the first Western-style shaft to be used in a metal mine in Japan was opened. With the addition of these facilities, the government aimed to acquire foreign currency with an eye toward modernization and also to acquire monetary benefits. Furthermore in 1885, the new Meiji government attempted to increase production at the Sado mine in preparation for shifting to a modern monetary system based on a gold standard. Oshima Takato, upon being appointed director of the Sado mine, subsequently opened several new facilities including the Takato shaft, the Kitazawa flotation mill using new German technology and also developed the Oma Harbor. In 1890, a mining school was also opened to promote the domestic production of mining technology and important policies were implemented in regard to mining education in Japan.
Thereafter in 1896 the Sado mine was sold to Mitsubishi Goshi Kaisha (predecessor of Mitsubishi) and along with the Ikuno mine achieved rapid growth.
By promoting mechanization such as through the automation of power systems, Mitsubishi succeeded in returning the mine's momentum back to the level of production it achieved at its peak during the Edo Period. New production levels helped it to achieve far more than the 400kg of gold it produced annually during the latter half of the Meiji Period. During its 93 years of operation, Mitsubishi produced approximately 33000kg of gold, and it was Mitsubishi's modern mining and ore processing technologies that made a significant contribution to the increase in gold production. 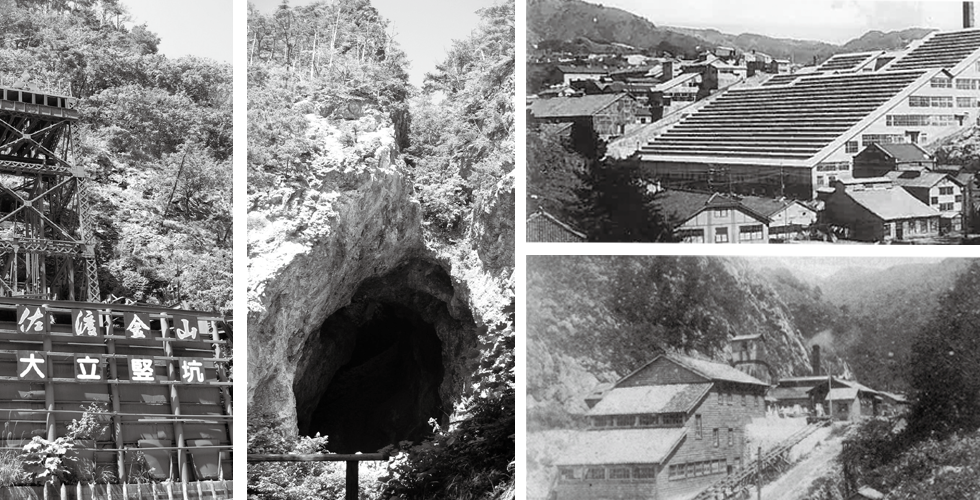 Long-lasting History of Sado Gold Mine

Sado Gold Mine's history as Japan's largest gold mine ended when operations were closed down in 1989, after producing a total of 78000kg of gold and 2,300 tons of silver. Today, the site is open to the public as the Historical Site of Sado Gold Mine (operated by Golden Sado Inc.) and is striving to be inscribed on the World Heritage List. Though now dormant, to this day, the Sado mine still continues to convey its long 400-year history of mining technologies and production systems.