Supporting the modernisation of Japan through the production of silver

The history of Mitsubishi Materials Corporation began with the entry of Mitsubishi Group predecessor Tsukumo Shokai into the mining industry. After the establishment of its marine transportation business in 1870, Tsukumo Shokai progressed into the coal-mining business where it developed as one of the core businesses of the Mitsubishi Group. Among the many mines opened by the company, this feature focuses on Ikuno Silver Mine. This became the base of its processing business and silver production supported the modernisation of Japan. It is still operating today as the Ikuno Processing Center.

An hour's ride on the Bantan Line from Sanyo Shinkansen Himeji Station brings you to Ikuno Station in Asago City, Hyogo. Another 10 minutes to the east through Kuchiganaya, Ikuno, brings you to the Historical Ikuno Silver Mine Site (operated by Silver Ikuno Co., Ltd.). The stone gate is adorned with the Imperial chrysanthemum, an emblem that shows the mine was once owned by the Royal Family. The site is equipped with an approximately 1,000m long tunnel organised for tourists utilising the remains of an actual tunnel and mine. There are also displays of a variety of valuable materials that show aspects of the silver mine over its 1200-year history. Ikuno Mine was thought to have originally opened in AD807. Around 700 years later in 1542, Suketoyo Yamana, the Shugolord of the Tajima Region, started mining the Kanagase Vein. During the Edo Period (1603 – 1868) mining was controlled by Nobunaga Oda and Hideyoshi Toyotomi, and Shogun Ieyasu Tokugawa established the Silver Mine Magistrate. Along with the Sado Gold Mine and Iwami Silver Mine, Ikuno Silver Mine became an important source of income for the Edo Government. Ikuno Silver Mine flourished under the 8th Shogun Yoshimune (1716 – 1745), when the production of silver reached approximately 562kg per month. The livelihoods of more than 20,000 people were in some way connected to the Ikuno Silver Mine.

In 1868, Ikuno became the first mine operated by the Japanese government and during this time French mining engineer Jean Franciszue Coignet brought advanced European mining techniques to the operations. The mine once became royal property but was later sold in 1896 to the Mitsubishi Joint-Stock Company, predecessor of the Mitsubishi Group. It grew into a major mine under the management of Mitsubishi and provided the basis for the Japanese monetary system. During the Edo and Meiji Periods its annual average production was approximately 3 tons, an amount which increased to 11 tons in the Showa Period. Ikuno Silver Mine’s total production of silver over the 430 years since the start of full-scale mining until its closure was 1,723 tons. The number of miners employed to increase production during the war exceeded 2,600 and Ikuno town flourished along with its growth. However, the deterioration of quality and increasing mining costs led to the closure of Ikuno Silver Mine in 1973, ending its nearly 1,200-year history. The remains of the veins and mines have been preserved as a historical site and it now serves as a popular base for tourism in Tajima.

The population in Ikuno has been decreasing ever since the closure of the silver mine, but in August 2013 Mitsubishi Materials Corporation opened a new plant, called the Ikuno Processing Center and now employs 15 people. Based on trusted relationships and bonds developed through its long history the plant now manufactures special tools used for the processing of automobile parts. Mitsubishi Materials continues growing in harmony with the region as it writes a new chapter in its history. 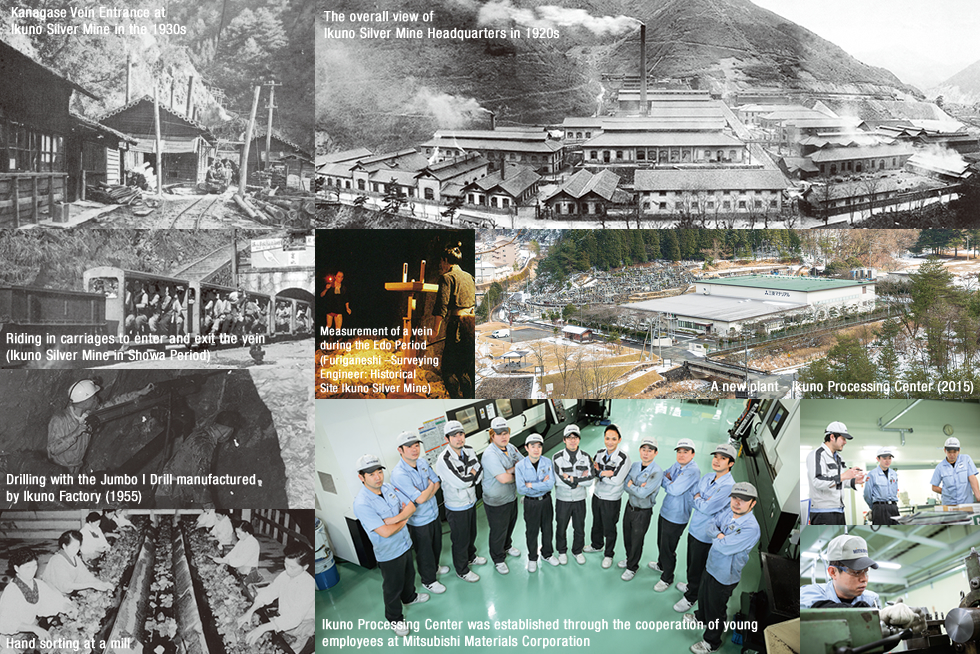