Automobiles fitted with a gasoline engine first appeared in Germany roughly 150 years ago. In 2013, the number of automobiles owned throughout the world surpassed 1.1 billion, which means that one in every 6.2 people in the world's total population of about 7.2 billion owns a car.
In fiscal 2014, 89.75 million automobiles were manufactured globally and the numbers continue to grow in the huge Chinese and U.S. markets.

The global spread of automobiles has totally surpassed the imagination of the early days and has given rise to new issues in the form of environmental concerns. In the 1960s, exhaust gas regulations were first established in California and Japan, and from this emerged the development of various environmental technologies by automobile manufacturers striving to satisfy these regulations. Today, automobile manufacturers are expected not only to make continuous efforts to eliminate harmful substances from exhaust gas in order to prevent air pollution, but to also minimize the emission of carbon dioxide, which is a principal greenhouse effect gas.
These modern countermeasures have also had the effect of reducing fuel consumption and generating advantages for the consumer.

Source: The graph represents a simple conversion of the fuel standard in each country from the International Council on Clean Transportation. When a correction is applied by a simple calculation to account for a fuel consumption measurement mode, taking into account deregulation measures and differences in vehicle types, the fuel standard for the EU becomes 21.1 km/L (2021 reference value is calculated by METI), and for the U.S. it becomes 16.5 km/L (2020 reference value calculated by METI). The 2010-2015 values for Japan have been added by METI (they are reference values, as the measurement mode differs from 2015).

Some of today's representative fuel efficiency technologies for gasoline and diesel vehicles include the incorporation of a direct-fuel injection and a turbo charger to a downsized engine that discharges less exhaust gas than previous engines. Naturally aspirated gasoline engines with a compression ratio maximized to the utmost limit and hybrid systems that utilize both engine and electric motors are other examples.
Low prices and running costs have also been strongly demanded by consumers of Japan's category of small vehicles called "kei cars". For this reason, all the latest available technologies have been applied to the development of fuel efficiency enhancement, with the result that kei cars now deliver greater fuel saving performance than regular passenger cars. In fact, models have emerged that deliver fuel efficiency that far exceeds 30 km/L*.

The emergence of electric vehicles

Electric vehicles, which do not consume gasoline have also begun to penetrate the market. These include electric vehicles that require charging, those that are equipped with fuel cells that generate electricity within the car (use hydrogen and oxygen to generate electricity and discharge water as a result), and those that are equipped with an engine that acts as a generator in addition to fuel cells. Engines for electricity generation are also called range extenders. Various types of range extenders, such as reciprocating engines, rotary engines and turbines are already commercially available or have been proposed. They are one of the most practical systems for the diffusion of electric vehicles as they utilize existing fuel infrastructures even though they are specifically designed to generate electricity.
Some vehicles equipped with a range extender even deliver a fuel efficiency of more than 60 km/L*.

Diverse technologies that continue to evolve for environmental conservation 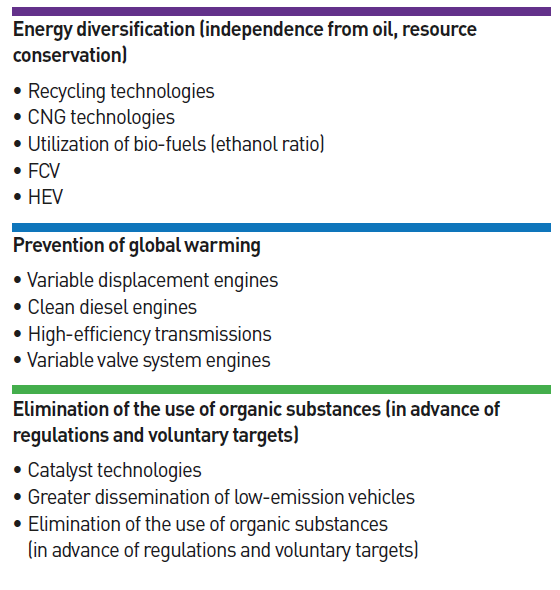 ●The drive battery and other key components for electrification are installed under the floor.
• Offers the same in-car space and luggage space as the base car.
• The passenger space is separated from high-voltage wires to ensure safety.
• The lower gravity centre of the body contributes to excellent handling.
●A compact, high-efficiency motor is adopted and installed in the rear
(same rear-wheel drive as the base car).
●A large-volume drive battery is installed to realize sufficient cruising distance for the daily use for a kei car.

* Measurement based on the JC08 mode fuel economy test cycle

Self-generating electric vehicles that maintain optimal driving mode in various driving situations
The Plug-in Hybrid EV System (PHEV) was developed independently by Mitsubishi Motors as a new derivative electric vehicle. When driving at low to medium speeds through residential areas, PHEV switches to EV Driving Mode that mainly uses electricity from the drive battery. When the drive battery runs low or powerful acceleration is needed, it switches to Series Driving Mode so that the engine automatically begins to generate electricity and supplies power to the motors and battery. When driving at higher speeds it switches to Parallel Driving Mode to convey the high-rpm, high-efficiency driving power of the engine directly to the transmission and to also assist the motors. Furthermore, when decelerating the motors act as a generator to regenerate the deceleration energy and recharge the drive batteries.

●EV-based plug-in hybrid EV system
• A large-volume battery is installed under the floor in the centre to ensure a sufficient cruising distance.
• Twin motor 4WD is adopted with a drive motor in both the rear and front.
• An engine for power generation and drive is installed in the front.
• The driving force of the motor and engine can be switched using the front transaxle.

The advancement of production technologies is essential to the realization of fuel efficiency. This is also true in the metal cutting industry. The turbo charger is not new technology, but the production of efficient turbos was made possible by the advancement of cutting tools capable of high-efficiency, prolonged machining of materials that can withstand high-temperature exhaust gases, the source of power for turbines.
Additionally, lower production costs have become possible, for example by the high efficiency machining of cylinder blocks and heads previously made of cast iron but that are now made mainly from aluminium. Mitsubishi Materials' cutting tool business has worked closely with automobile manufacturers both in Japan and overseas and has engaged in the advancement of machining technologies throughout its 80-year history.
Thus far technologies that support improved fuel efficiency of automobiles, with the main focus on the motor have been introduced. However, in reality the foundation of such technologies is extremely wide and includes transmissions that are used in combination with the motor, drive systems and lightweight bodies and even extends to motor oil, low-resistance tyres and improvement of the fuel itself.
Nevertheless, motors, transmissions, drive systems and bodies to which these components are assembled and mounted to are mostly made of metal. Automobiles may someday be made solely of plastic and electric parts, but that day is probably still far in the future. Mitsubishi Materials' cutting tools will therefore continue to realize machining processes that contribute to the further growth of the automotive industry.