"Hakkeyoi, nokotta!" The Gyoji clad in his beautiful costume signals the start of a powerful bout between two sumo wrestlers. The setting is perfectly set, with the suspended roof over the dohyo and ready to show the distinguished rituals of the ring entering ceremony and the bow dance. When you go to a Honbasho to watch sumo, there is far more to enjoy than simply the "match".

Known as Japan's national sport, sumo dates back to the age of mythology. The word sumo originally comes from the ancient noun sumahi meaning "battle". The word sumahi can be found in Kojiki (Records of Ancient Matters) and Nihon Shoki (Chronicles of Japan) written in around 720 A.D., to describe contests of strength between the gods.
During the Heian Period (794~), messengers were sent around the country to gather sumahi people (sumo wrestlers) to entertain nobility and the emperor. After the bouts, grand banquets were held. Sumahi continued as a court event for 400 years, while slowly developing into the form we know today as sumo.
In the days of the samurai from the Kamakura Period (1185~) through the Azuchi-Momoyama Period (1573~), shoguns and feudal lords began to take an interest in sumo wrestling and they too, gathered wrestlers to watch. Warring Lord Oda Nobunaga had a special preference for sumo, inviting wrestlers from all over Japan to the Azuchi Castle in Omi to perform. It is well known that he welcomed the strongest into the castle as retainers.
Sumo started to become a form of box office entertainment when collecting entrance charges from the public started during the Muromachi Period (1336~). By around the middle of the Edo Period (18th century) different sumo groups that had independently been holding performances, gathered together. This gathering created the basic structure of what would later become professional sumo wrestling, with six scheduled Honbasho tournaments per year. Sumo's popularity grew quickly with the rise of great wrestlers such as Onogawa Kisaburo and Tanikaze Kajinosuk, one of the first Yokozuna's. Along with kabuki, it became established as the people's entertainment of the Edo Period.
Throughout its long history, sumo gradually took shape as a sport and became a traditional culture unique to Japan. Today, while balancing tradition with innovation, sumo still continues to fascinate fans from across Japan and all over the world.

The heartland of Sumo

(Our editorial team is located in Ryogoku, the Sumo town)

Six sumo tournaments called Honbasho are held each year. Three of them (the January, May, and September Basho) are held in Tokyo, at the Ryogoku Kokugikan just north of JR Ryogoku Station. Colorful banners with names of sumo wrestlers written on them line the streets during the tournament, adding a true ambience to the sumo town. The first thing that makes visiting Ryogoku Kokugikan especially exciting is approaching the stadium gate. There's a good chance of meeting stable masters, who were once famous wrestlers because they stand there as ticket collectors.
Once inside the hall, you are enveloped in the sumo world with 20 information booths side-by-side and the area is usually bustling with ushers dressed in hakama and ladies dressed in kimono. There is a sumo museum on the first floor of the Kokugikan where you will find an abundant collection of sumo artifacts such as woodblock prints, banzuke (rank charts), and keshomawashi (ornamental aprons worn by Yokozuna).

Sumo rules are simple. The Gyoji is the referee and two men wearing sumo belts wrestle until one wins by knocking the other down or pushing him out of the ring.
If one commits a foul such as intentionally pulling the opponent's hair or by grabbing him, he automatically loses. Tournaments called Honbasho are held six times a year and each lasts for 15 days. The wrestlers engage in one bout a day and the wrestler with the most wins is the champion. The official list showing the wrestlers' rankings is called the banzuke. There are ten ranks, from Jyonokuchi at the bottom through to Yokozuna at the top. In Japanese sumo wrestling, the banzuke means everything. The ranking represents the size of each wrestler's salary and the level of privileges they are entitled to. Only wrestlers who have reached Sandanme (third stage) are allowed to wear leather-soled sandals and only Juryo and above can wear the formal attire, haori hakama.The promotion and demotion in ranks is determined at the banzuke ranking conference held after each tournament. Essentially, the rank of a wrestler goes up when he wins eight or more bouts during a tournament and goes down with eight or more losses. Traditionally there are no bouts held between members of the same stable or between brothers. This is based on the deep-rooted hidden samurai compassion that would pity both parties confronted in such a situation.

There are 82 winning moves in Sumo

A winning move in sumo wrestling is called a kimarite, of which there are currently 82. Of these, the most commonly used is yorikiri, followed by oshidashi. Nearly half of the kimarite used in post-intermission bouts during the 2015 Hatsu Basho (January tournament) were yorikiri and oshidashi, which are classified as basic kimarite skills. Other skills include sokubi otoshi where an opponent is struck downs from above the neck and tsumadori where the opponent's foot is pulled back in order to make him fall.

1. Only men can become sumo wrestlers.
Women are not allowed.

To become a sumo wrestler, you need to clear three conditions to pass as a new apprentice, known as a Shin-deshi 1) You are a male, under 23 years of age and have completed compulsory education. 2) You are at least 173cm tall. 3) You weigh at least 75kg. It is documented in the sumo rules that "wrestlers are limited to the male gender".

2. The "Splits" are an important part of the training to become a strong wrestler.

The most important thing for a sumo wrestler is to train his body to be flexible so that he doesn't get injured. As part of this routine they practice the "splits", stretching their legs to the left and right. Wrestlers who have completed training must be able to spread their legs 180 degrees while touching their torso and chin flat on the floor. New wrestlers practice in the sumo training room in the Kokugikan for six months to learn the basics, including the splits.

3. Ryogoku is filled with restaurants that specialize in chanko nabe, a sumo wrestlers cuisine.

Chanko nabe is known as standard sumo wrestler food. It is a huge hot pot with stewed seasonal vegetables, fish and chicken, eaten with a dipping sauce or ponzu vinegar. Many specialty restaurants line the streets Ryogoku,home of the Ryogoku Kokugikan where chanko nabe originated. 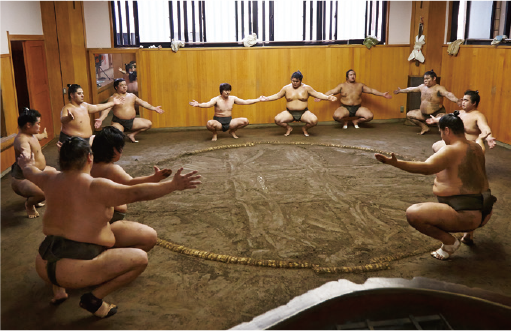 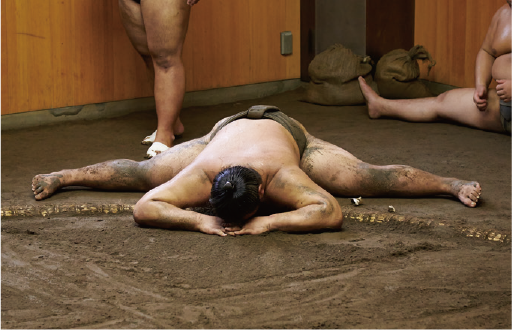 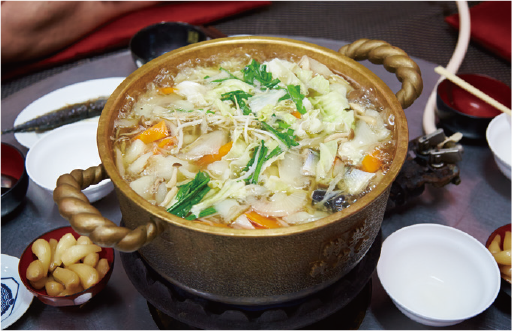 4. Throwing salt before a bout is to cleanse impurities.

Before a bout sumo wrestlers sometimes throw salt. This custom began as a ritual to cleanse the dohyo, which is considered a sacred place.
During the Honbasho, about 45 kilograms of salt is used a day. This adds up to more than 650kg for the duration of the tournament. Wrestlers are only permitted to throw the salt after they reach Makushita status, and only when time allows.

Sumo wrestlers are paid on a salary system, but salaries are paid only to wrestlers who are at Juryo ranking or higher. The Makushita and lower ranks are paid an allowance for each Basho. A Yokozuna's basic salary is 2.82 million yen per month and a Makushita's allowance is 150,000 yen per Basho. There is also prize money and the more a wrestler wins, the more money he can earn.

6. The Man-in Onrei (full house) banner is displayed in accordance with ticket sales

The banner over the suspended roof reads "Man-in Onrei" and means that it is a full house (see upper photo on previous page). This banner is lowered after the Juryo bouts are finished at the moment the "ki" (wooden clappers) start to signal the beginning of the Makuuchi bouts. It is said that the banner is only shown if at least 80% of the admission tickets for that day are sold by 3:00 p.m.