Manufacturing technology of metal moulds is essential for insert production

High-performance materials frequently used in cutting-edge fields such as the automobile, aircraft and medical industries are hard to process; and this has driven the advancement of cutting tools. While uniquely formed inserts with newly added capabilities have been developed in the tool industry, the history of geometry technology is not well known. One of the departments that supports insert manufacture is the Mould Group. This department manufacture moulds that are essential for the production of inserts. Let’s take a look at the history of Mitsubishi Materials’ mould manufacturing from the time before the NC machine was popular, to the present day.

The role of metal moulds for insert manufacturing

1. Tungsten (WC) is mixed with cobalt (Co) and dried to produce powder.
2. The powder is placed into a mould and pressed.
3. The pressed powder is heated at 1,300 degrees C or higher to make a sintered body.
4. The sintered body is machined (ground, honed, etc.).
5. The final product is CVD or PVD coated, then a final inspection is conducted.

Most of the inserts manufactured by Mitsubishi Materials are created through these steps. Step 2 on the left (presswork) uses metal moulds for the manufacture of inserts. A mould is installed on the press machine, filled with the powder and then pressed. With an automated press line, several thousand pressed powder forms can be manufactured in 24 hours. The moulds are designed to withstand a few hundred thousand pressings.

The dawn of inserts

Mitsubishi Materials launched brazed tool holders in 1956. These were made by attaching cemented carbide blades onto the edge of a copper shank by using a silver brazing method. While they featured excellent abrasion-resistance, fracture-resistance and high machining performance, the cost was prohibitive because the entire tool holder had to be discarded when any part of it was damaged.

To address this problem, we developed tools with replaceable carbide inserts. The first inserts were simple triangular, square or circular shapes with flat faces. Soon afterwards the first chip breakers were formed on the rake face to improve chip control and reduce machining resistance. It is worth noting that it was difficult at that time to form breakers by grinding, even simple cross-sectional shapes proved challenging. Added to this was the fact that inserts with ground breakers had a longer manufacturing lead time as well as a higher price. This prompted us to develop a method of directly embossing the breaker onto the surface of the insert during pressing. This enabled chip breaker formation into the carbide material by the forming the faces of the upper and lower punches of the press mould using electric discharge machining (EDM). However, because we only had general-use milling machines for producing electrodes, we could only manufacture breakers with a simple cross section along the edge. These were called perimeter breakers.

Beginning of the NC era Appearance of moulded chip breakers

NC machining centres became popular around 1980. The introduction of three-dimensional CAD made it easier to create NC programs for the processing of electrodes, which allowed complex curved surface machining using ball nose end mills. This flexibility in designing breakers instantly expanded to allow the manufacture of a wide range of chip breakers for different purposes. This made the development of the MA type and standard breakers with a 7-degree positive rake angle possible.

Before the development of machining centres, the programming data for electrode machining was input using punched paper tape and floppy discs. This entailed difficult procedures that we cannot imagine now. Yoji Takimoto of the Mould Group remembered the old procedures well and said, “Paper data tape was used to input the data. This black paper tape had holes punched in it and the information given by the sequence of the holes was read by a special machine. This was a long and drawn-out process and the information for just a simple perimeter breaker would mean a tape about 10 m long. It also took time to input the data; and if we made a mistake, we needed to start from the beginning. It took a lot of time and energy.”

Then, specialists would use manual measurement devices such as toolmaker’s microscopes and micrometers to confirm that the finished mould conformed to the drawings. It was difficult to measure the space between the female part and the upper and lower punches, therefore, they used a uniquely developed technique called Suriawase (manual adjustment) for fine manufacturing adjustments.

After the year 2000, all the insert and mould designing was done using three-dimensional CAD. From the three-dimensional model, CAM capability had improved to enable the creation of programs to machine electrodes used for EDM. This drastically enhanced design flexibility, not just for breakers, but for the entire insert. In addition, measuring devices and the equipment used to manufacture moulds improved significantly. It was because of these improvements, inserts with new geometries that were impossible to make with the standard technology, became possible.

The three-dimensional measurement devices implemented around that time also made it possible to accurately measure the new geometries. These improvements in processing and measurement technology drove advances in manufacturing. Along with the progress of such manufacturing technologies, mould production also increased rapidly.

Tomotsugu Goda who was involved at that time looked back and said, “Due to the expanded flexibility of insert design, orders from the development group became more complex. Our role is to produce moulds to form pressed powder units based on requests. CAD allows easy modeling, but producing the actual pressed powder units is a challenge.

Our mission, however, is to develop a method to realise all the forms that the development staff request.

After 2010, inserts with more complex forms were launched one after another. Major examples are inserts for the VFX cutter with vertical cutting edges and horizontal holes, and inserts for the VOX series with multiple corners and moulded chipbreakers. Some inserts had forms whose pressed powder unit could not be removed from the female part of the mould by using the regular pressing method. Therefore, special moulds that could separate the female part were developed.

As insert performance increases, forms tend to become more complex, which in turn makes the manufacturing of the moulds more difficult. For example, spilt moulds mean more parts; and this requires that each part to be more accurate to fit properly. The procedures for setting the moulds in the press machines also becomes more complex.

Throughout its long history, the Mould Group has contributed hugely to the commercialisation of a wide range of inserts by improving the moulds, developing machining methods and upgrading preparation. Mr. Goda, who was involved in solving the problems of producing a wide range of moulds said, “I encourage the new product development team members to speak out and make requests. While we may not be able to realise their ideas, we will work tirelessly with them to try. We never know what we can accomplish until we try. Striving for innovation is the real charm of mould manufacturing.”

Kentaro Ono is in charge of press work in the same Production Engineering Department. He was in the Mould Group for 10 years and he wants customers to appreciate the intricacies of inserts. Each insert is the result of the enthusiasm and technique brought to bear by dedicated professionals. He told us his vision at the end of the interview, “When people in this industry, including our customers, see our inserts, I hope they wonder how we did it. With this in mind I would like to continue creating such innovative products.”

Moulds are our life, so when we see a product, we naturally start imagining what the mould used to make it looked like. A mould is like the shadow of the article they produce.

The moulds we manufacture don’t appear in front of the customer, but inserts are impossible to make without them. We each feel individual responsibility and pride in the important work we do as professionals supporting the development and manufacture of outstanding inserts.

Young employees who have only been with the company for a short time also contribute significantly by identifying problems and making proposals for new machining methods. We continue to cooperate with one another without regard to age or experience to manufacture innovative moulds. 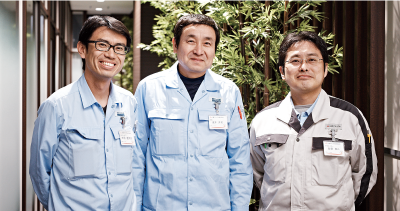