Miracle Coating: Evolution of a technology ahead of its time

The road to new Miracle products

In the late 1980s when TiN coating was at the height of its popularity, aluminium-rich Al-TiN coating appeared and took the spotlight by completely changing existing conventions. The technology was named Miracle Coating and this article takes a look at the coating that changed the history of cemented carbide tools.

Part1 : 1987~ Miracle Coating was the result of a unified effort

Aluminium-rich TiN coating hit the market in 1987. This new coating was developed when the high speed steel tool manufacturer Kobe Steel Co., Ltd; at what would later become Mitsubishi Materials Corporation Akashi Plant, entered the carbide cutting tool business. The dark violet coating is popular now but the trend at that time was gold TiN coating. Of course, this was a technology to be proud of but it wasn't certain how the new coating would perform in the market place. Samples were exhibited at JIMTOF in 1988 and the cemented carbide Miracle coated drill was introduced in 1990. In 1991 the Miracle end mill was also introduced to the carbide tooling market. Although there was a degree of anxiety prior to launch, the Miracle end mill was highly praised as an outstanding product and unlike anything that had been seen before. As a result, the company moved to quadruple its production capacity. It was a great source of pride that machining of mould materials after the hardening phase was now possible with Miracle end mills, something that was unthinkable at the time. Although electric discharge processing was a popular posthardening process, faster manufacturing by machining with end mills significantly reduced the lead time of moulds. The product became a Miracle tool. Ironically, because Miracle Coating was even more durable than the company could ever have imagined it left a shortage of materials for performance evaluations. It's still a big issue and often causes discussions between coating developers, who want evaluations in machining and evaluation staff, who want to reduce testing costs. Miracle end mills won the Technical Award of the Japan Society of Mechanical Engineers in 1995. In the same year, the Nozomi Shinkansen also received the same award. It is satisfying to know that the technologies applied to the end mill were viewed as being as valuable as the Shinkansen. 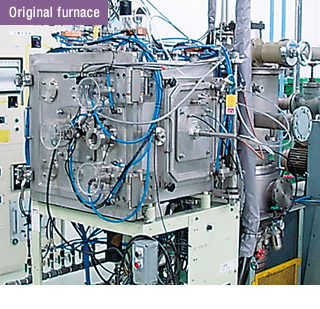 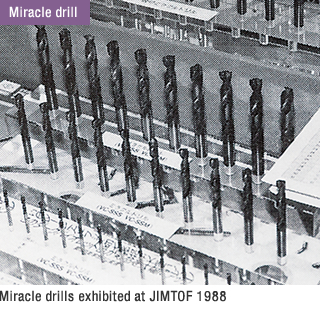 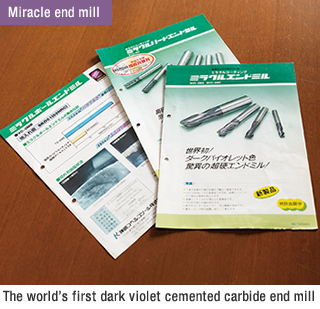 Aluminium-rich TiN coating, which was the major feature of the original Miracle Coating, and the existing manufacturing know-how supported the application of Miracle Coating to a wider range of products. Mitsubishi Materials, for example, was the first company to add Si, which was widely used in PVD coating. AlTiSiN coating incorporated the high hardness and oxidation temperature characteristic of Miracle Coating, and in conjunction with newly developed cemented carbide materials and geometries, made it possible to machine steels with a hardness greater than 60HRC. Another class leading example is the Violet coating AlTiN that is applied to high-speed steel tools. Coated highspeed steel tools are actually more difficult to manufacture than cemented carbide types. Although high temperature is required to optimise the features of a coating, the hardness of high-speed steel tools deteriorates at 550 degrees C and above. This creates a need to maximise the features of both coating and tool by finding the best balance. All companies involved in coating need to overcome this difficulty and Mitsubishi Materials are always striving to advance the technology. Violet drills were difficult to develop but they are still popular and the hard work needed to finalise a successful tool for the market place was worth the effort.

In 2000 the Akashi Plant became a direct subsidiary of Mitsubishi Materials Corporation. Miracle Coating technology was immediately applied to solid carbide drills and also to carbide inserts, one of Mitsubishi Materials’ major businesses. Insert processing at that time relied on CVD coating methods, with PVD coated types used only as a secondary line. However, with the development of Miracle Coating and then combined with advanced tool geometries, PVD became the major technology. The VP15TF grade in particular became a major material for inserts and delivered versatility through the synergy of Miracle Coating and a suitable substrate material. To emphasise the popularity of this new grade, it was often said, "If you don't know which grade to use, use VP15TF."

Miracle Coating was also applied to cemented carbide drills. Unfortunately, the Miracle drills produced at the Akashi Plant in 1990 were not as profitable as had been hoped. However, the ZET1 series of drills that were produced at the same time and the new WSTAR drills led to the expanded use of Miracle Coating for drilling applications. In terms of solid end mills, a new Impact Miracle Coating was developed that combined nano-crystal mono-layers of Al-Ti- Si-N. Combining this new coating with a suitable cemented carbide material led to the introduction of Impact Miracle end mills. The introduction of this new generation of Impact Miracle end mills meant HSS materials could be machined, where as previously HSS could only be machined by grinding or eroding. 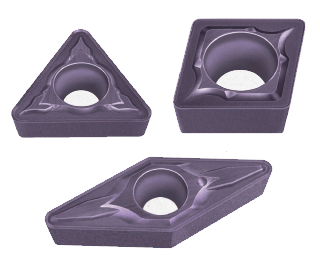 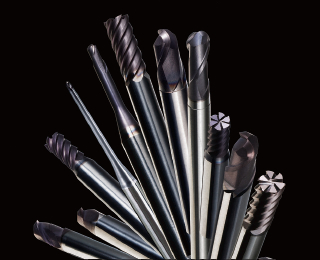 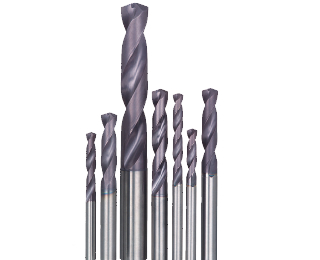 High performance products using PVD coatings have evolved through development that has focused on a wide range of applications. Combining technology and different coatings over a wide range of compositions, PVD coating has continued to improve at an ever increasing rate. Mitsubishi Materials' most advanced PVD coating series is "Miracle Σ." The Miracle Σ series Smart Miracle Coating was developed for machining of difficult-tocut materials. This newly developed Al- Cr-N group coating delivers long tool life when machining Nickel based and Titanium alloys. With ZERO-μ Surface technology, adhesion of the material being machined was vastly reduced and lowered machining resistance to achieve surprisingly efficient results.

Inserts in six different grades were released through the MP61, MP71, and MP91 series for milling. These grades are individually optimised to meet the specific high performance needs for ISO P, M, and S material applications. The abrasion and thermal cracking problems that are often caused by milling are addressed with a nano-laminated Al-Ti-Cr-N group coating (TOUGH-Σ Technology). For turning inserts the MP90 series was introduced for machining difficult-to-cut materials and is based on an aluminiumrich Al-Ti-N compound, a special feature of Miracle Coating. For drills the multipurpose DP1020 grade was developed and together with the nano-laminated Al-Ti-Cr-N group coating it was found this combination was successful in significantly reducing margin wear. Furthermore, with the unique ZERO-μ Surface and TRI-cooling through coolant hole technology, machining resistance was significantly reduced and improved chip removal performance realised stability when drilling. 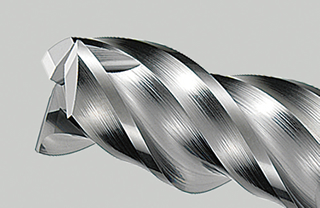 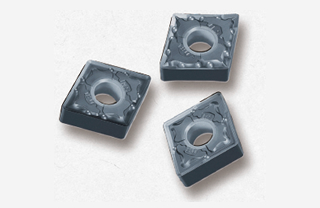 In the 28 years since Miracle Coating was first introduced, performance requirements for PVD coatings has become ever more demanding. Development and technology will continue moving forward so that products that exceed customers'expectations can be delivered.