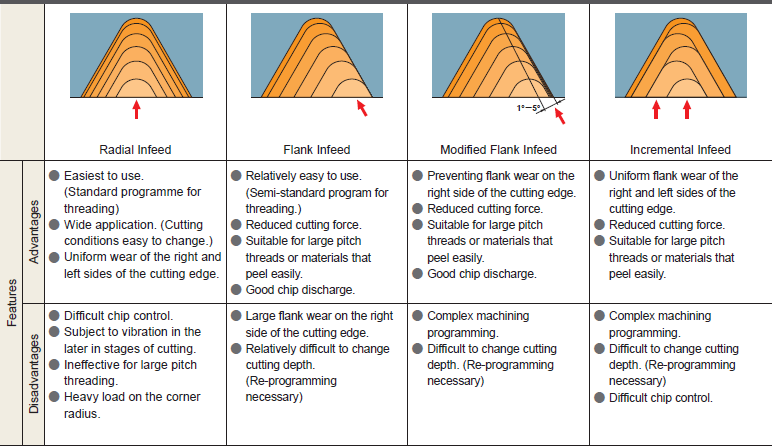 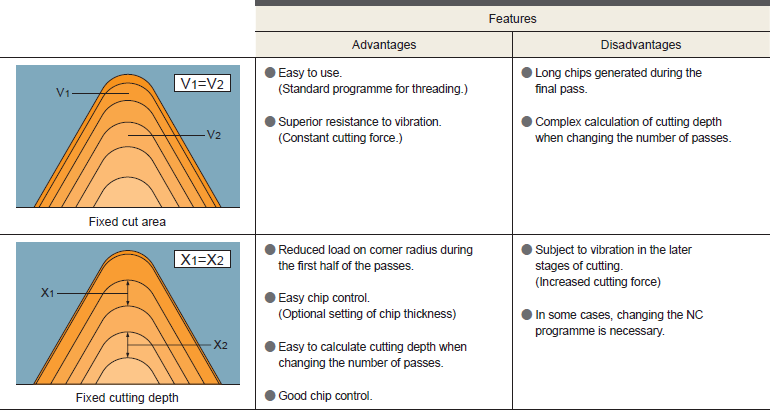 * It is recommended to set the depth of cut of the final pass to 0.05mm─0.025mm.
Large cutting depths can cause vibration, leading to a poor surface finish.

Formulae to calculate infeed for each pass in a reduced series.

* Tool life and surface finish accuracy can be increased by changing the threading method from flank infeed to modified flank infeed.
* Chip control can be improved by increasing the cutting depth in the later half of passes.

Cutting Depth and the Number of Passes

Selection of the appropriate cutting depth and the right number of passes is vital for threading.

• For most threading, use a "threading cycle program," which has originally been installed on machines, and specify "total cutting depth" and "cutting depth in the first or final pass."
• Cutting depth and the number of passes are easy to change for the radial infeed method, thus making it easy to determine the appropriate cutting conditions.

Features and Benefits of Mitsubishi Products

• Change to flank or modified infeed.
• During radial infeed cutting, use an inverted holder and change the coolant supply to a downward direction.
• When using the radial infeed method, set the minimum cutting depth at around 0.2mm to make the chips thicker.

• Increase cutting speed. (Dependant on the maximum revolution and rigidity of the machine.)
• Reduce the number of passes. (Reduce by 30-40%.)
• A reduced number of passes can improve chip discharge because of the thicker chips generated.

• Change to flank or modified infeed.
• When using radial infeed, reduce cutting depth in the later half of passes and lower the cutting speed.

• A final wiping pass should be performed at the same depth of cut as the last regular pass.
• When using the flank infeed method, change to radial infeed only during the final pass.