History of the Evolution of the Solid Carbide Drill

The ZET1 drill appeared in the latter half of the 1980s as the first solid carbide drill in the industry.
Its genes have been inherited by the WSTAR drill, the current core drill product of Mitsubishi Materials. In this issue, we trace the evolution of the solid carbide drill.

Part 1 : 1987~ The ZET1 drill that rewrote the book on drilling performance

In the latter half of the 1980s, when brazed and high-speed steel drills were the mainstream product used across various industries, Mitsubishi Materials embarked on the development of the solid carbide drill. Brazed carbide drills already existed in the market, but due to technical reasons they were only available in large diameters. Nevertheless, Mitsubishi Materials anticipated that there would surely be a time when small diameter solid carbide drills would be in demand and began development in a small corner of a factory. However, during the 1980s, computing technology was in its infancy and all calculations and design was done manually. Days upon days were spent designing the ideal flute and cutting edge geometry through simple trial and error. It was a time when products were developed based on engineers' experience and sense, rather than on the basis of data and simulation that have become the standard today.
After several years of development, the ZET1 solid carbide drill finally came into existence in 1987 as the first solid carbide drill in the industry.

At the time, high-speed steel drills had approximately a 70% share of the market, so we were very confident of the ZET1's performance as a solid carbide drill. It delivered five times greater drilling efficiency, ten times longer tool life, steady discharge of chips and an overall higher drilling performance.
In other words, it represented a dramatic evolution. However, contrary to expectations, it did not sell well. The first reason was its price. Compared to high-speed steel drills, the carbide type was around 30 times more expensive.
This meant that what customers used to buy for 500 yen would become 15,000 yen. In the final analysis, one hole would cost less and production efficiency would increase, but it was difficult to set a precedent in the market so that it would open up to the overall advantages of the solid carbide drill in terms of cost.
Another reason was that initially there was little knowledge about how to handle and operate solid carbide drills and we needed to begin by teaching customers how to use the drill correctly. Solid carbide drills perform best when using what is known as peck or step drilling cycles, and at that time many customers only used conventional machines and methods that were not suited to the peck or step drilling processes. Therefore, we offered trainings in cooperation with machine tool manufacturers, and provided information to customers so that they knew of the correct methods to gain the most efficiency from the new drills. Furthermore, since many customers were not familiar with the need for accurate resharpening of solid carbide drills in order to maintain the drills' performance levels, we also disseminated knowledge of how to care for them. These efforts, made in conjunction with marketing activities required a large amount of time, but owing to their steady influence the ZET1 drill eventually came to be accepted, primarily by the automobile industry. In hindsight, the sense of accomplishment we experienced after overcoming the hardships and receiving customers' understanding of the advantages of the product, plus their words of praise, remain strong in our minds.

Roughly ten years after the ZET1 drill was born, the solid carbide drill had become widespread across the industry, and various products including those of other companies had appeared in the market.
New developments were also demanded of the ZET1 and the development team had run up against a wall as to what types of improvement should be made. It was then that the general manager of development gave the following advice: "Go and hand cut holes in bars of soap until you find an answer." We spent several days thereafter, using both Mitsubishi and competitors' drills, single-mindedly drilling a huge amount holes in soap by manually rotating them. As a result, we discovered many things through the sensations we felt in our hands, such as where the point of resistance begins and how chips are discharged. This led to a shift in concept from the ZET1 drill's linear cutting edge to a curved type. We thus explored how to realize a wavy type cutting edge that no one had ever seen before. The inspiration for this curved shape came suddenly from a moment while cooking when using a food processor to chop ingredients. Inspired by the bold curves on the blades of the food processor and after much trial and error, we ultimately came up with the WSTAR solid carbide drill with its unique wavy cutting edge.

Through the wavy edge and new flute geometry we succeeded in minimizing the size of chips and this enabled a more efficient discharge. In addition a newly developed point shape ensured excellent concentricity and positional accuracy of holes. Furthermore, we were able to extend tool life by adopting VP15TF Miracle coating. These features ensured that the WSTAR drill series, launched in 2002, became recognised for its accuracy and long tool life and has become a product that is still favoured by many customers today.

Part 3 : 2006~ The ongoing evolution of the WSTAR drill series

The WSTAR drill has further evolved since 2006 in response to the needs of the market. The series of drills has expanded and now includes the general-purpose MWE/MWS drills designed primarily for carbon and alloy steels. In addition, the MNS, MHS, MMS and MCS drills that are designed specifically for machining aluminium alloy, high-hardened steel, stainless steel and CFRP materials respectively, have also been launched.
Amongst the highlights that are available today are also the super-long type drills for machining deep holes with an aspect ratio of up to L/D = 30. Each of these products embodies technologies, originality and ingenuity that only Mitsubishi Materials could achieve. An example of this originality is the MNS drill that was developed for machining aluminium alloys. To lubricate the precise spot near the centre of the drill where chips tend to adhere, further improvement of the coolant flow was required. Straying beyond the conventional two-hole drill, we collaborated with the manufacturing technology group and created a drill with four coolant holes, the first drill of its kind in the world. Then, taking this technology further, we developed and released the MVE/MVS general-purpose solid carbide drill series in 2013 by employing TRI-Cooling technology to create an originally shaped coolant hole that requires extremely high precision. By taking an innovative approach to increasing the flow rate, we succeeded in enhancing cooling performance, lubricity, discharge of chips and the overall performance of the drill itself just because of the design of the coolant hole. Long tool life against a wide range of work materials was also realised by applying a PVD coating (DP1020) that was designed specifically for drills. WSTAR is indeed the perfect solid carbide drill series for the new generation of engineering needs.

CLOSE UP Manufacturing technology for tools with coolant holes: The results of Mitsubishi Materials’ technology and persistence 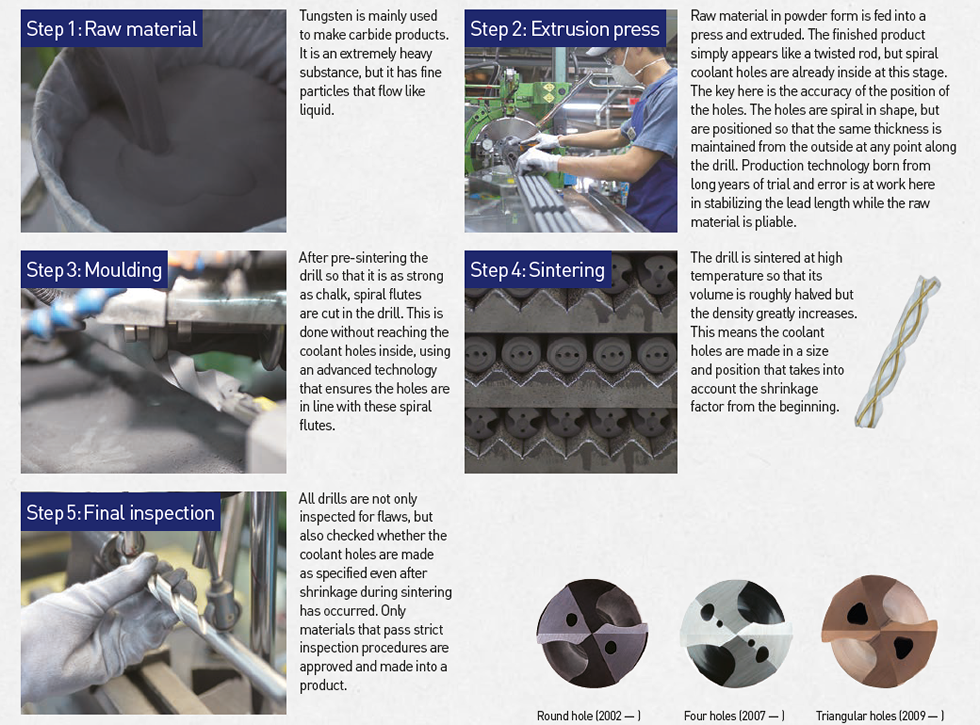 The demand for drills with smaller diameters and longer lengths in recent years has meant increasing difficulties when manufacturing tools with coolant holes. For example, in ultra-small diameter drills, the product itself is thin and the flutes are extremely narrow, so even greater hole positioning precision and pitch precision is required. Similarly, with longer drills, it has become even more important to ensure the lead of the helix remains constant, and production technologies continue to evolve daily toward that end. Additionally, tools with coolant holes generally have round coolant holes, but Mitsubishi Materials develops and manufactures tools with coolant holes that differ from the conventional two round holes—such as four holes and triangle holes—to increase drill performance. Only Mitsubishi Materials uses coolant holes of differing shapes according to the work material. The various coolant hole shapes are able to be produced precisely because the drill and materials plants are located on the same site, and are the product of strong cooperation and hard work among members of both plants. The three types of coolant holes embody Mitsubishi Materials' technologies and pride as a company that manufactures products from its own raw materials.

Unraveling the history of the solid drill

The ZET1 drill appeared 30 years ago. As I look back at the history of the solid carbide drill thus far, I realise it is precisely because we are a manufacturer capable of developing and producing a whole gamut of items, that we are able to continually produce new drills that the market requires. This process is a direct result of our interlinked work processes and through the concerted efforts of the entire development team.
Going forward, we will continue with a flexible outlook to produce new materials and shapes in order to pursue further innovations.