Enshi Goju Yocho by Utagawa Kunisada The fight of a ninja who sneaked into a house.

Shuriken, which literally means a sword hidden in the hand, is a special weapon traditionally used by ninja. Samurai also learned to use them along with their use of spears, training in archery and fencing. Tokugawa Yoshinobu, the Edo Period’s last Shogun, is known to have been an expert in the use of shuriken. When and how shuriken were developed remains unclear. Some argue that forged weapons used in the Sengoku Period (1467-1568) evolved into shuriken, others claim that they evolved from throwing weapons received from China in ancient times. Shuriken are effective to a range of up to 15 meters. Small and black in color, they are hard to see, which makes them hard for the enemy to dodge. Because they need to hit the target in a certain way to be fatal, shuriken were traditionally used to distract the opponent so that the warrior could dispatch him with his sword or escape; but they could also by coated with poison and thrown with the intention of nicking the enemy. There are two types of shuriken, bo shuriken (stick type) and kurumaken (wheel type) and different schools of martial arts used different shapes. The colour, however, was invariably black. The black color was produced by placing cotton on heated shuriken as they hardened. The cotton burns and adheres to the metal. This made the shuriken not only less visible, but also rustproof, easy to handle, and the rough surface created by this process retained the poison that was applied.

Some say that ninja emerged in the Asuka Period, about 1,400 years ago. They were originally thought to have been men in the service of Prince Shotoku. Known as shinobi, they collected information from the Imperial Court. Historical documents mention shinobi in and after the Nambokucho Period (1336-1392). The term ninja became popular around 1955.

The role of and attitude toward ninja changed along with the times. The major role was not fighting in battles. Shinobi in the Sengoku Period served as spies for feudal lords, tasked with infiltrating enemy territory and collecting information. Therefore, their most important mission was to return alive, which motivated ninja to practice a wide variety of skills, including shuriken. The popular image of a ninja is of the silent spy hiding in an attic eavesdropping on the conversation taking place below. In fact, they most commonly blended in to the local population and picked up information from conversations. In the peaceful Edo Period (1602-1868), the major role of ninja was to gain as much information about the political situation of neighboring territories to protect their own domain and lord. As shinobi gradually disappeared in the late Edo Period, factually inaccurate images of ninja appeared in novels and other entertainment. Ninja were often portrayed utilizing their mysterious skills to commit theft. In Kabuki (Classical Japanese drama) and Ukiyoe (pictures of everyday life in the Edo Period), ninja were often dressed in black and held shuriken in their hands, a portrayal that influenced the current image of ninja. Ninja remain cloaked in mystery and we’ll have to wait for future studies to tell us more about these interesting figures.

There are two major types of shuriken, bo shuriken (stick type) and kurumaken (wheel type). Bo shuriken are easier to make and more powerful than kurumaken. Kurumaken, on the other hand come in a wide variety of shapes. Kurumaken are more popular than bo shuriken because they have many blades, each of which can hurt enemies.

How to hold and use shuriken

There are different ways of holding shuriken for different occasions. There were no specified ways of use them.
They were made to hit a target no matter how they were thrown.

How to use shuriken

[Hon-uchi (Orthodox Throw)]
The orthodox way of use kurumaken.
Swing your arm down from above. 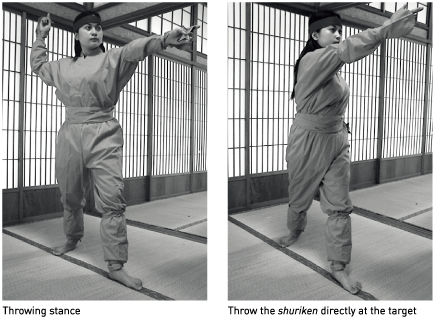 [Yoko-uchi (Sideway Throw)]
Slide it sideways. This technique is often shown in manga; however, it is almost impossible. It is necessary to hold the shuriken firmly to make a powerful throw.

[How to carry shuriken]
Shuriken were carried in a deerskin pouch and hung on the hip. A few Shuriken were also placed in a hidden breast pocket for protection and easy access when attacked by enemies.

Tip of the Shuriken

Ninja carried many weapons other than shuriken. One of these was a sickle and chain. It was made compact so it could be held easily in one hand. It was hidden in a pocket for easy access. 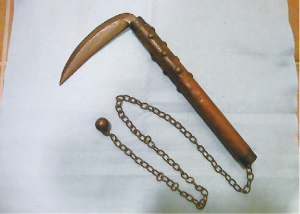 2. Did historical figures serve as ninja?

Quite a few historical figures were rumored to have been ninja. For example, some believe that Matsuo Basho; the author of Oku no Hosomichi, who wandered throughout Japan, and Ishikawa Goemon; a Robin Hood figure who stole from the rich to give to the poor, were ninja. This is certainly possible, and many more people may have been ninja as well. 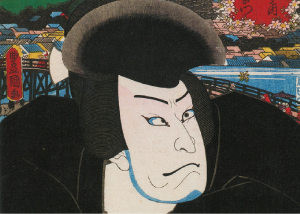 3. Ninja did not wear black.

We picture ninja clothed in black, but in Shoninki, one of three books covering the secrets of the ninja arts, describes ninja as wearing dark brown or dark blue. Before electricity, clothing didn’t have to be black to be hard to see at night. 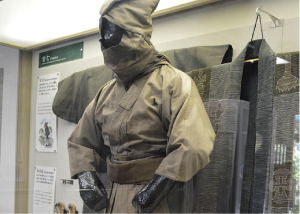